Firstoff, BUY MY ALBUM! If you dig my shit, go to https://stephenpaultaylor.bandcamp.com/

I got a phone call yesterday from Anna, who works for a radio station in Munich, Germany.

Here is the interview

It is in German, so I will translate it for you.

“Shit! Fuck!” – is repeated several times. These two curse words are making the rounds of the internet in the form of a song. In short, it looks as if the Internet has a new anthem.

“It’s very rare that you find a treasure on the internet that is so beautiful, so amazing, that you feel almost like Neil Armstrong first setting foot on the moon when discovering it.”

Announces the author of a US online magazine. It is clear that what is now a landmark in the history of the whole large network entertainment needs to be. It takes the video in question just 15 seconds.

You can see a scrawny middle-aged guy in a Berlin street. He wears an out of fashion sequin shirt, Skinny jeans and a turquoise headband. His right leg flailing to the beat of the keyboard, writing a piece in dance step history.

Louisa Menke – funnily enough, a Dutch Profiskaterin – posted the video of the quirky street musician on Instagram, entitled “The ‘everybody knows shit fuck’ dance”. A friend then pushed the clip onto the nerd forum Reddit, where he was upvoted with several thousand Likes to reach gold piece within a few hours. Users love quatrains. There are hour-long loop versions and remixes, which would make Skrillex pale with envy.

It take a few hours until a Reddit user recognizes the musician. The bird of paradise is a Canadian artist named Stephen Paul Taylor. Of course, Stephen catches wind of the sudden hype about his song. The success of his simple line of text is due to the right timing, the choice Berliner says.

“I think it embodies the frustration and confusion that’s going on in the world right now. Because things are pretty fucked. Really all you can do is say Shit’s Fucked and accept it in a way. I think maybe that’s just the zeitgeist.”

And what works in the wider context, is of course also small. “Everybody Knows Shit Fuck!” or “Shit’s Fucked” as the correct title of the song is – is just a piece of everyday life.

So the text first understands the community. Only when the song appears in full on the Forum, is clear: “Shit’s Fucked” is a political song. It is a question that should be a 9/11 “Inside Job” was – ie planned or approved by the US.

“You blew up your towers to justify war. I don’t really care what your arms are for. More money on defense, fuck hospitals. Fuck human beings, fuck humanity …”
(Line of text from “Shit’s Fucked”)

“Shit’s Fucked” is suddenly no longer harmless, but it defends a hard-hitting conspiracy theory. Many users are disappointed.

“They sort of generalized me as being a 9/11 Truther and they tend to disregard it. And a few people have commented that they prefer the short version because there’s more ambiguity.”

At best, then, you take “Everybody Knows Shit Fuck” than what it was in the 15-second original version: A quatrain of intuitive words that hit the nail on the head. Because then this could be an Evergreen – just a lunar landing under the network hype.

ps. Here is  painting I’ve been working on. It’s a commissioned piece. 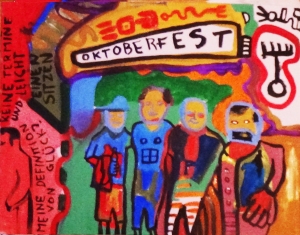 One thought on “I Was Interviewed About My Viral Video, “Everybody knows Shit(‘s) Fuck(ed)””