So, I was approached by a Belarusian filmmaker Kiryl Sinkou. He’d heard about me through Eliie (aka Strip Down) and was interested in doing a) a story on me for his website and b) a music video for the second single from my new EP, “Single And Seventeen” #singleandseventeen. He works for great little website with his friend Wladi and Liz called 34mag.net. They also joined the first online SPT Fan Club,  (based in Russia).

@blastingbrains hey! we have such a good fan club about u! Russia love u too 😉 https://t.co/JWYH64MW9V

We had a short skype. We were both on the same page. This song was my “hit song” until “Shit’s Fucked” kinda magically blew up. It was ripe for a proper audio treatment and music video. It was ripe to be on vinyl. That’s right, folks… vinyl. Muthafuckin vinyl, bitches! I’m muthafuckin recordifying that shit up like a motherfucker strung out on speed for 666 hours lying in a ditch in Tennessee after a night of bad decisions and inconclusive deductions about the fate of our frail and self-deluded but still strangely redeemable human race!

Anyway, we had a skype chat. I liked his ideas. I appreciated where he was coming from… so blammo! Kiryl, Liz and Wladi came from Minsk, Belarusia to the B Dot and we met up. Lovely Minna Partanen, esteemed dramaturgist and theater-maker joined the crew as makeup artist. So, we filmed our frikkin faces off… in the frikkin cold… because we are THICK SKINNED people from bigass countries that are snowy and cold 6 months of the year.

Today was the first day. We froze like popsicles as we filmed in slo-mo at the fountain and outside of Alexa (mall). We were shut down by nice security guards, but there’s nothing like a little drama to shake things up and spice up the day.

We polished off the day shooting in the Ubahn station (Hermannplatz). The proverbial crowd of strangers filmed us with their phones. I stared into the lens of Kiryl’s camera and tried to pretend they weren’t there, gathering in droves.

OH YEAH, and we’re pushing the release date of “SHIT’S FUCKED” music video and the album release for a month, so we can amass reviews and blogs about my new EP, “Single And Seventeen”.

I’ll make an event for this. We are also doing crowdfunding to make VINYLS! Wait for it… I’m on it.

I love you
Stephen 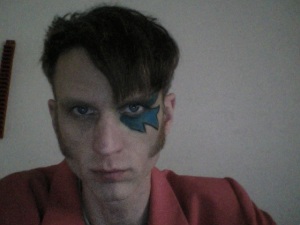